Dr. Brittany S. Hull is an interdisciplinary scholar from Chester, Pennsylvania whose work centers Black women’s language and Black girl literacies. She holds a PhD in Composition & Applied Linguistics from Indiana University of Pennsylvania. Dr. Hull is a 2017 CCCC Chair’s Memorial Scholar, and a recipient of the 2018 CCCC Scholars for the Dream award. Currently, her research examines the scholarly identity development of Black language speaking Black women teachers of English as they enter and navigate academia (specifically, the field of composition & rhetoric). She is a proud HBCU Alumna of The Lincoln University of Pennsylvania and member of Alpha Kappa Alpha Sorority, Incorporated. When not teaching, one can catch Dr. Hull reading, listening to new music, or hanging with her friends. With a teaching commitment to honoring Black language and helping students bring more of their whole selves to their writing, Dr. Hull is currently a Writing and Rhetoric Lecturer at Stanford University 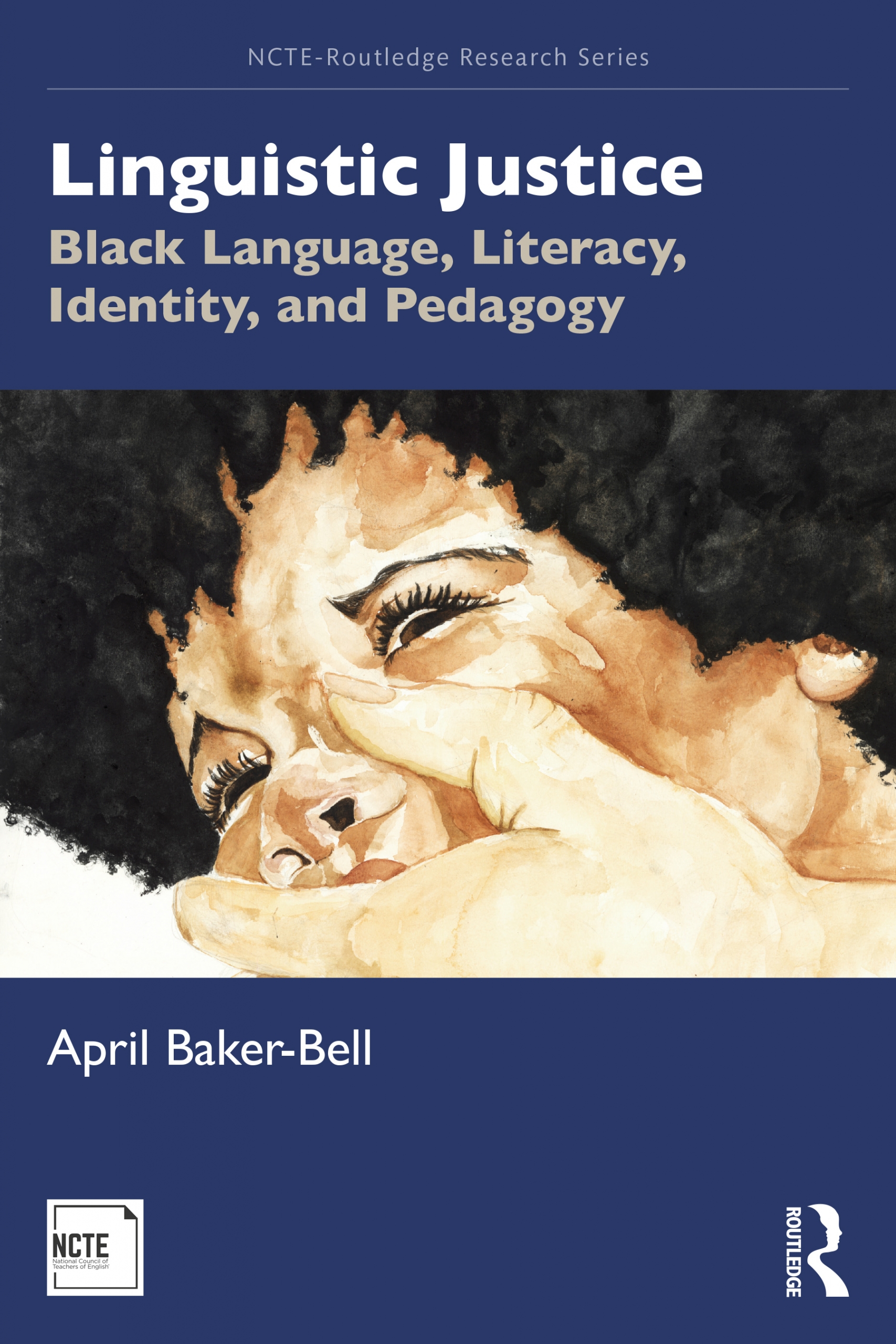 In Linguistic Justice: Black Language, Literacy, Identity, and Pedagogy, Assistant Professor of Language, Literacy, and English Education at Michigan State University, April Baker-Bell shows readers she ain’t new to the Black Language (BL hereafter) conversation, but that she true to it. Conversations throughout the field of composition and literacy studies bout the literacy development of Black people within the American Education System been a hot topic and continues today. It ain’t no secret that Black people in America have been the topic of discussion in various conversations. Most of these conversations evolve round Black people…dare I say it…bein Black, literally. For example, the world has witnessed Black Americans of various ages be attacked and murdered by racist white people for doin seemingly normal activities like walkin, runnin, playin music, sleepin, singin outside, and complying with police demands to name a few. Moreover, Baker-Bell’s research on BL and pedagogical suggestions for how literacy educators, researchers, and students can benefit from first examining and then incorporating BL into the writing classroom, makes Linguistic Justice: Black Language, Literacy, Identity and Pedagogy required reading for those who want to know about the conversations regarding the validity of BL and its use by Black and non-Black people alike.

What’s the 411?: Overview of Linguistic Justice

Through this argument, Baker-Bell confronts the catalyst behind the continued conversation of BL and literacy education of Black students who speak and write using BL as it is an integral part of their identity: white supremacy. White supremacist ideologies within the American education system where Black students were and continue to be demeaned and labeled deficient because they don’t use “White Mainstream English” (WME hereafter) is because the idea of WME as the only acceptable form of English has been ingrained into the psyche of educators, parents, and students (3). Therefore, any language spoken or written that don’t mirror WME was/is deemed wrong, inadequate, deficit and the list goes on. As a teacher-scholar-activist, Baker-Bell challenges educators, scholars, and graduate students in various fields dedicated to language and literacy, to fight back against white supremacist ideologies which promote Anti-Black Linguistic Racism and subsequently Anti-Blackness, to Black students across the United States and the world. In addition to this argument, Baker-Bell presents “Linguistic Justice as a Black Language Theoreticum, a theory meets practicum” (8), for its contents expand seemingly traditional models of teaching. In chapter 2, Baker-Bell introduces readers to the theory of Anti-Black Linguistic Racism to show how prejudice against Black language is synonymous with racism against Black people and culture. Moreover, she offers Black Language Pedagogy as a method for students and Antiracist educators to resist and dismantle Anti-Black Linguistic Racism within the classroom, ultimately the world. Chapter 3 highlights the voices of several BL speaking high-school students who Baker-Bell worked with regarding their lived experiences with Black Linguistic Racism in and outside of school. This chapter is unique in that Baker-Bell centers these student voices to show how Anti-Black Linguistic Racism negatively impacts Black students’ identity and agency in and outside of the classroom. Chapter 4 showcases Baker-Bell’s Antiracist Black Language Pedagogy in action. Here, she details examples of lessons and activities she used to teach the high school students at Leadership Academy how to “challenge, interrogate, unlearn, and work toward dismantling Anti-Black Linguistic Racism” (64). In Chapter 5, Baker-Bell shares responses of the students she worked with previously (in chapter 3) on what they learned about Black Language and Anti-Black Linguistic Racism via the activities and lessons she taught using Antiracist Black Language Pedagogy.  Finally, Chapter 6 considered a Bonus chapter by Baker-Bell, provides readers with an update on her research with the students from Leadership Academy in addition to activities for English teachers to incorporate Linguistic Justice as a framework within they classes. Specifically, these activities and lessons curated within chapter were developed from award winning Young Adult fiction author, Angie Thomas’ bestseller, T.H.U.G.: The Hate U Give. Through the various chapters, Baker-Bell takes readers on a journey that ain’t for the faint of heart, especially if they goal is to actively practice Anti-Racist Pedagogy and Anti-Racist Black Linguistic Racism.

Words from the Black Language G.O.A.T.

In Linguistic Justice, readers learn of Baker-Bell’s contribution to the ongoing BL conversation through the foreword that precedes its initial chapters. Michigan State University Professor of English, Emerita, the livin legend herself, Dr. Geneva Smitherman highlighted Baker-Bell’s contribution to the BL and literacy education conversation by continuing da work of those scholars who came before her in the foreword. Smitherman praises Baker-Bell sayin:

At long last, this is the book we have all been waiting for. A book designed to develop our students’ critical understanding of and historical consciousness about Black Language. A book that builds on that critical inquiry to motivate students to formulate ways of impacting and changing the linguistic status quo. As a leading member of a new generation of language and literature scholar-teacher-activists, Dr. April Baker-Bell represents for Black Language and it’s speakers because she gets it. (xii)

Dr. Smitherman’s declaration that Baker-Bell “gets it” is a statement that rings true and is shown throughout Linguistic Justice. As an early-career scholar in composition and applied linguistics whose research centers how Black Women English Teachers-Scholars (BWETS hereafter) navigate the field as BL speakers and writers, Linguistic Justice snatched the teeny tiny bit of edges I had left (my doctoral journey took the majority of them; but that’s a story for another publication).

Engaging with Linguistic Justice: How specific Chapters influenced my Pedagogy

As mentioned previously, Linguistic Justice challenges not only educators, but ANYONE in the field of English and literacy studies to critically examine they own beliefs regarding BL as well as the ways they intentionally or unintentionally perpetuate Anti-Black Linguistic Racism and Anti-Blackness in they teaching. For example, in chapter 3 “Killing Them Softly” I was forced to revisit my own experiences with Anti-Black Linguistic Racism as a young jawn, when Baker-Bell introduced the counterstories, a womanist practice,  of Black students she worked with at Leadership Academy Charter School in Detroit. Specifically, I resonated with the experience of “Janel” who had spent the majority of her life navigating Anti-Black Linguistic Racism from teachers, administrators, Black elders and her own BL speaking family members.  Resonating with Janel’s experience reinforced my commitment to actively dismantle Anti-Black Linguistic and Anti-Blackness within myself (ex. checkin myself when I start tryna judge someone’s level of customer service simply because they use BL to communicate). In my teaching, I encourage my students to bring their full selves not only to my course but to the assignments too. I encourage them to write in they home languages in an effort to recognize and honor the validity of languages outside of WME. I model this by usin BL in my syllabus and in the written feedback I provide on papers. I look forward to incorporating Linguistic Justice and Baker-Bell’s use of composite character counter storytelling methodology into my own research on BL speaking and writing BWETS.  In chapter 5 “Black Linguistic Consciousness” Baker-Bell calls out language and literacy educators when she says

You can’t be out here saying that you believe in linguistic diversity at the same time of shutting students down as soon as they open their mouths. You have to be about this life for real for real! You have to be ready and willing to challenge everything you once understood about language and what students need in language education. You have to be ready for the messiness that comes with the process. (100)

Baker-Bell urges educators to move beyond talk about bein or becoming Anti-Racist Educators by challenging themselves and their colleagues to actively engage in dismantling Anti-Black Linguistic Racism. For students, Baker-Bell provides them with the academic receipts to protect themselves from and ultimately challenge Anti-Black Linguistic Racism and internalized Anti-Black Linguistic Racism from teachers, administrators, elders, and family members who still privilege WME as the gold standard. While Baker-Bell’s Linguistic Justice calls out educators, researchers, graduate students to focus on undoing Anti-Black Linguistic Racism, in true Black woman fashion, Baker-Bell shows that while she is calling these people out, that she ain’t gon leave em hangin’ to try to carry out this call on they own. Thus, she provided the previously mentioned bonus chapter (see “THUG LIFE”) with sample activities for how language and literacy educators can integrate Antiracist Black Language Pedagogy into they own teaching. Baker-Bell was gracious enough to share seven “Black Language Artifacts” “that can be implemented, altered, or used for inspiration to help teachers think through how to use literature in pursuit of linguistic and racial justice” (104).

Why You NEED Linguistic Justice…Periodt!

Linguistic Justice: Black Language, Literacy, Identity, and Pedagogy ain’t no ordinary theory/research text, it is a movement. Linguistic Justice is a movement in that its content propels language and literacy educators and students to become movers and shakers within the continued fight against Anti-Black Linguistic Racism, Antiracist pedagogy, and Anti-Blackness as a whole—a critical component of womanist practices. Specifically, for the field of composition, Linguistic Justice directly addresses the common question of how to teach about BL as a vital part of literacy education for not just Black students, but non-Black students also. For teachers and scholars of composition, Linguistic Justice serves as a bold reminder of how many were taught to privilege WME as the correct way of writing and speaking within the writing classroom. Therefore, Linguistic Justice should be considered required reading in teacher education programs, as well as professional development for current teachers across the K-16 levels. What’s more, is Baker-Bell’s Linguistic Justice Framework could benefit not just composition but can be included in trainings and curriculums for non-humanities/social science fields. As Smitherman complimented sayin she “gets it”, I truly believe Linguistic Justice was Baker-Bell’s collective homage to the brilliance and beauty of Black Language, Black identity, Black education, Black people, and most of all Black freedom, and she desires for everybody and they mama to “get it” and get it (meaning purchase the book) you should, dear reader.