Dr. Chen Chen is Assistant Professor of English at Winthrop University in Rock Hill, South Carolina where she teaches first-year writing and professional and technical communication courses. She received her Ph.D. in Communication, Rhetoric, and Digital Media from North Carolina State University. Her research interests include technical and professional communication in crisis contexts and pedagogical practices; how graduate students professionalize into the field of rhetoric and composition across different disciplinary spaces; and Chinese feminist rhetorics. 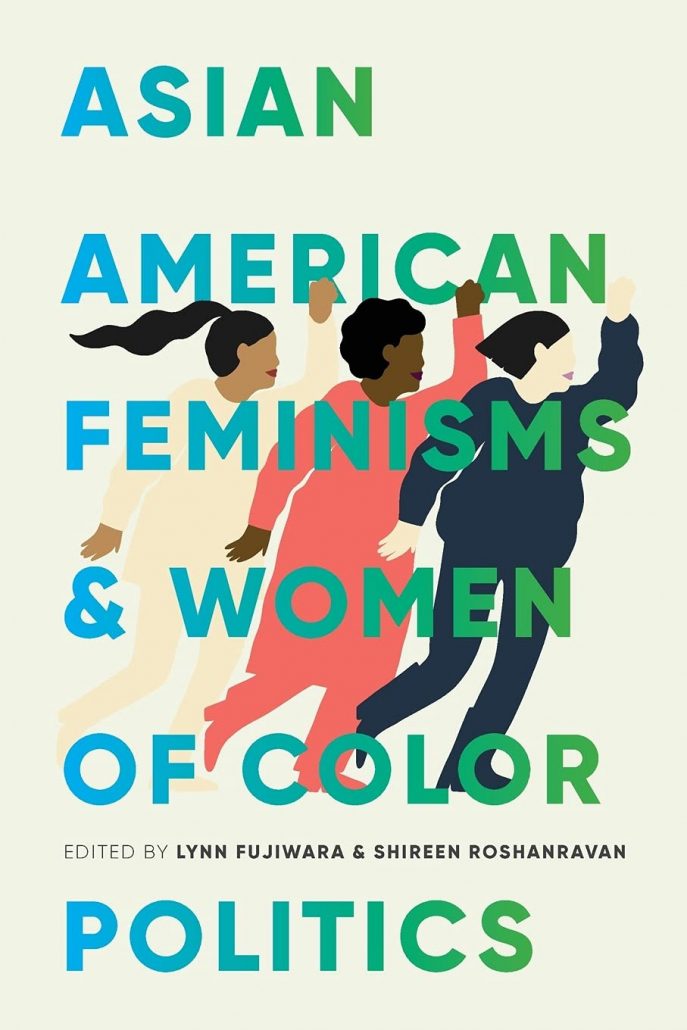 Asian American Feminisms & Women of Color Politics is a collection edited by Lynn Fujiwara and Shireen Roshanravan. I first read the book in the summer of 2020 in the midst of another wave of Black Lives Matter movement calling for justice for George Floyd, Breonna Taylor, and many other Black people murdered by the police. This was not only another moment of awakening for me to the racial injustice in this country, particularly against Black people, but also to reflect on my own racialized positionality. Now, I’m reading this collection for a second time, barely a year later, at yet another kairotic moment when six Asian women’s lives were taken by a white terrorist in a racially and sexually motivated crime in Atlanta and the nation is perhaps finally recognizing the racial violence against Asian peoples that has long existed yet particularly heightened due to the COVID-19 pandemic.

In this review, I highlight important takeaways from each section, without necessarily going through each chapter linearly but thematically, because this journey of learning and growth for me is iterative and recursive, embedded in my own experiences and positionalities as a Chinese permanent resident living in the U.S., a scholar and student of feminist rhetorics.

Several chapters challenge readers to reflect on the labels we use for Asian Diaspora, such as “Asian American” (107) or “Asian Canadian” women (156): how can we perceive this complex identity in all its multifacetedness? Who may be included or excluded by these labels? What gets erased or neglected? Stephanie Nohelani Teves and Maile Arvin critique the use of the term “Asian Pacific Islanders.” They remind us of the colonial history of Pacific Islanders, and argue that Asian Americans need to recognize their own complicity in marginalizing Pacific Islanders and erasing their histories while offer recommendations for teaching and research in Asian American studies.

In discussing the “South Asian Canadian women” cultural position, Sunera Thobani warns us of “colonial ideologies of passive victimhood and patriarchal cultures characterized by misogynist violence” which neglect the struggles South Asian Canadian women experience against social, economic, and political forces (157). Similarly, Thomas Xavier Sarmiento highlights the importance of a descriptive approach to the complex and multiple identities one might embody. Sarmiento looks to diasporic Filipinx literature for a Filipinx American feminist and queer political orientation to challenge colonial oppression and white supremacy, arguing that “gender liberation must be fundamentally queer” (100).

Erin Khuê Ninh’s chapter on sexual violence in the everyday lives of Asian American women is particularly poignant to read in light of what happened in Atlanta. Ninh calls us to attune to the “gender socialization” that Asian American women may experience, arguing that “Asian American women’s experiences of sexual coercion are ‘culturally’ inflected: sabotaged by the model minority paradigm not as stereotype but as subject formation” (76). She argues to “make coercion structural, not inflictive” and emphasizes that the question of consent should not be that of a “yes/no delineation” but instead “How do you feel?” (77).

I especially appreciate the detailed research accounts by authors who lay bare their own vulnerability, self-reflection, and positionality as they approach their research and activist work (Sarmiento; Ninh; Fujiwara; Kimoto). I resonate with the emphasis on how our positionality in any situation may allow us to “approach resistance movements from varying points of entry and belonging” (Fujiwara 247). There isn’t one Asian American subject, as there isn’t one Asian American feminist subject. We are always already embedded in a contextualized network based on interconnected identity markers and values.

Part four of the book presents inspirational activist work and Asian American feminist organizing, demonstrating how this contextualized examination and reflection of positionality is crucial to advancing feminist causes. Ma Vang’s analysis of a refugee community health organization in the U.S. and theorizing of a Hmong feminist praxis of care pushes the limits of feminist epistemology and centers refugees not as passive victims needing help but active agents of change in their own communities who in turn also shape institutional practices and bridge different feminist formations (185). From a transnational perspective, Gina Velasco rejects the moralistic framework often adopted by international organizations and policies that further exploits gendered Philippine migrant workers by focusing almost exclusively on sexual labor as sex trafficking (202).

Similarly, Priya Kandaswamy calls for an intersectional approach to reproductive justice through the analysis of the criminalization of Purvi Patel in the U.S., highlighting the interlocking factors that shape the regulation of reproductive rights as much as gender: race, class, immigration status, and ability. Kandaswamy critiques the portrayals of Patel, by those who supported her, who prosecuted her, and by media in general that fall into stereotyping Asian women as deceptive, manipulative, and lack of agency, victims of their own patriarchal cultures rather than individuals who can make their own choices (223). Across the three chapters in Part four, we can see authors centering the agency of marginalized Asian American women and their own practices of empowerment while revealing the structural and systemic forces that aim to reduce the complex identities of different Asian American women.

Toward a Coalitional and Multiple Asian American Feminist Praxis

A central theme throughout the book is an emphasis on coalitional politics built across the differences of groups of people who identify as Asian diaspora, rather than essentializing any specific group as representing Asian or Asian American community. Many chapters (e.g., Velasco, Thobani, Kimoto, Sarmiento) challenge simplistic politics of representation and call for intersectional attunement not only along gender and racial lines, but also to historical, economic, social, and political contexts. And authors in this collection have demonstrated how this work can be done with care.

Tamsin Kimoto’s chapter brings forth the historical work underpinning the systemic racializing work in the U.S. that pitted Asian Americans against Black Americans. Referencing Sara Ahmed, Kimoto lays out how whiteness is a standard in reference to which the world is conceived, both as “an implicit and coercive goal” that non-white racialized others are oriented toward and “the barometer by which we [racialized others] measure our own successes” (143). This is why a feminist praxis valuing multiplicity is important. Fujiwara writes:

“a coalitional praxis that presumes the multiple interdependent heterogeneous subjectivities of Asian Americans requires us to utilize the lens of multiplicity, a lens that foregrounds racialized neocolonial systems of neoliberalism and globalization to illuminate incommensurabilities within and across Asian America as sites of coalitional consciousness-raising” (245).

Such lens of multiplicity is particularly important as we see Asian American feminisms and politics embedded in and connected with women of color feminisms more broadly. For example, Kandaswamy’s chapter connects the criminalization of Purvi Patel using feticide legislation to the broader prison industrial complex that disproportionate criminalizes people of color by drawing parallel between Patel’s portrayal as a sympathetic victim with the criminalization of Black women as “crack mothers.” This is not to reduce either group’s suffering, but to actually help us see the “common differences” in how the state seeks to control the reproductive rights of women of color (Mohanty, cited in 221).

Using the case of NYPD officer Peter Liang’s murder of Black man Akai Gurley, Roshanravan warns us the “model-minority racial project” (270). As Asian/Asian Americans, we should be reflexive of our own positionality and must not be disillusioned by the allure of model minority or be blind to the relative privilege that perception might afford us. An Asian American visibility must be achieved horizontally across racial interconnectedness in the “racial third space” with other communities of color without mimicking or co-opting other identification of its own cultural specificity (Roshanravan 268).

In our current context, the fight for justice for the murders of Asian American women cannot lead to calls for more police because we must recognize how police brutality has always been a danger to immigrant communities, Asian American communities and Black communities alike. As immigrants, we must resist the simplistic binary of inclusion/exclusion into a national identity of being American, but to actually challenge and transform that nationalistic construct to one that’s based on care for and celebration of differences.

“Stay in Place and Stay on the Move”

To challenge the ways that Asian Americans have been racialized in proximity to whiteness, I go back to Tamsin Kimoto’s use of “restiveness” in our orientation, which embodies both a meaning to stay in place and to stay on the move.

Restiveness as staying in place may mean staying with the “silence” that’s been associated so much with Asian communities in recognizing both how Asian Americans have been pushed to stay silent throughout history and how that silence has ill served the histories of Asian Americans and other people of color and Indigenous peoples (146). Staying in place in this way means to critically reflect on what has been left unsaid but also what’s been said and amplified. Similar to Kimoto’s example of the “Resistance Auntie” meme of an Asian Trump supporter (147), one might think of the more recent incident where a Texas GOP congressional candidate Sery Kim, a Korean American, made racist comments toward Chinese immigrants (Cole). A “staying-in-place” restive orientation in this case means rejecting both the racist nature of Kim’s comments and recognizing how her positionality is the result of historical and ongoing orientation toward whiteness in this country that has often aimed to pit different people of color communities against each other.

Upon this reflection, Asian Americans can be restive as staying on the move working against the violence toward Indigenous lands and communities in the context of Hawaii (Kimoto 148-149). Similarly, it also behooves Asian American communities to orient toward the struggles of Black communities, such as in the case of Asians4BlackLives campaign (Roshanravan 274). In both situations, we must stay on the move, shifting our investment away from the white heteropatriarchy toward the collective intersectional coalition building across minoritized communities.

I end my review here as I find this dual understanding of “restiveness” a good point of departure for me from this book back to my daily life as a scholar and teacher of rhetoric and composition and technical communication; my positionality as a Chinese woman living in the U.S., researching Chinese feminist rhetorics both in China and globally. As BIPOC researchers and teachers, our positionality in the academy is often already precarious. But our students rely on us, requiring that we be restive, modeling for them a critical understanding and reflection of personal identities contextualized historically, economically, culturally, and politically. For feminist scholars more broadly, this book offers another opportunity to learn about Asian American feminisms and women of color politics, drawing attention to sites where more rhetorical research may be needed.