Review of Lives, Letters, and Quilts: Women and Everyday Rhetorics of Resistance

Rebecca Jones is an Associate Professor of Rhetoric and Writing and Writing Program Administrator at Montana State University. She has published articles on rhetoric, writing, and argumentation studies found in Writing on the Edge, Writing Spaces, Enculturation, Composition Studies, and the collection Activism and Rhetoric: Theory and Contexts for Political Engagement. She edited a collection along with Kathleen J. Ryan and Nancy Myers titled Rethinking Ethos: A Feminist Ecological Approach to Rhetoric (SIUP, 2016). She teaches courses in science writing, design, pedagogy, public argument, and rhetorical theory. In her spare time, she can be found swimming, kayaking, hiking, biking, or walking in the woods. 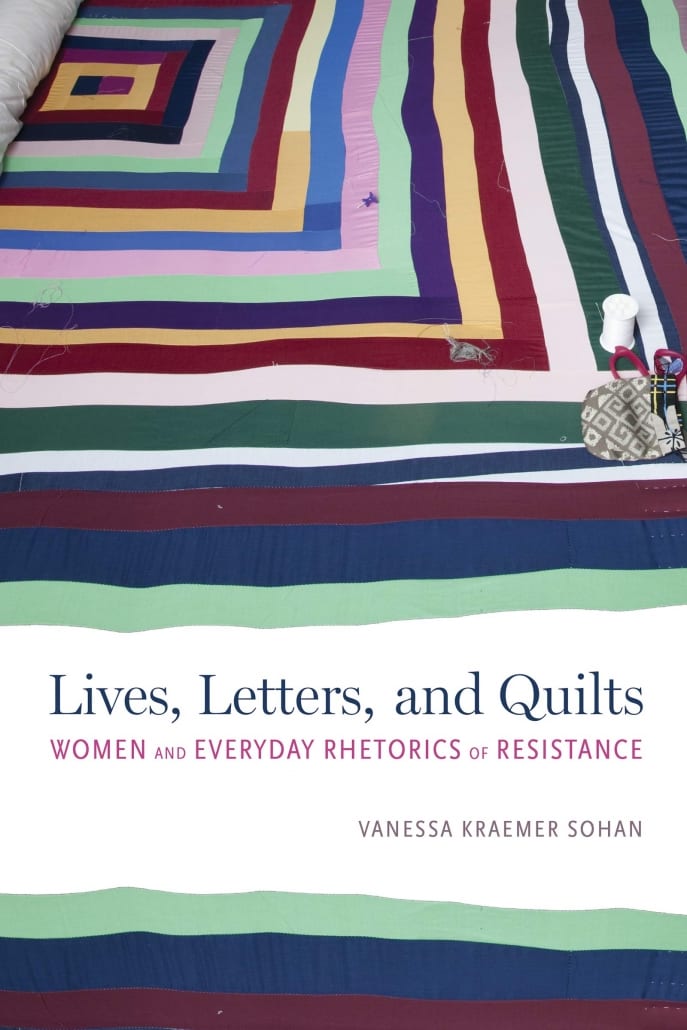 As I finish this review in late 2020, the electoral college has officially named Joe Biden the President of the United States. When Vanessa Kraemer Sohan was working on her project, Donald Trump had just been elected. The past four years has offered a soap opera complete with outsized characters whose antics are repeated and circulated on the national stage. In this era of hyperbole, a book on “the courage of ordinary Americans” is a welcome reprieve.

Lives, Letters, and Quilts dips into three very different moments in time and place: 1930s Oregon, 1860s Civil War America, Gee’s Bend Alabama in the early 2000s (though the quiltmakers’ art exists from the 1800s), and 1940 in South Dakota (one artifact). Sohan narrows in on specific figures that served as background characters of larger historical moments, but she argues that they employ “everyday rhetorics” when “faced with “a desperate problem” (146). For Sohan, they “[respond] heroically without resorting to heroic measures” (146). The book begins with the Townsendites, a group advocated for “old age pensions” after the Great Depression. Sohan zeroes in onone particular chapter president Pearl S. Burkhalter. Following this discussion is a chapter on the ministry of Eliza P. Gurney and, especially, her correspondence with President Lincoln during and after the Civil War. The Gee Bend Quiltmakers round out her case studies with a more contemporary group that found recognition in the “high art” community during the 20th century, though African American women have been practicing this art since the beginning of slavery.

Sohan takes up an old question about women rhetors: “where were the spaces in which women chose/were permitted to speak?” While the work is grounded in feminist rhetorical theory, Sohan primarily investigates the question via theories focused on textual composition. While both “recontextualization” and “translingualism” have been used in various fields, Sohan is interested in the ways they help us think about literacy, language, and writing practices especially as methods for “adopting more democratic and descriptive approaches to language and modal practices…” (9). While scholars of translingualism/transmodalism, that she most often cites, are concerned about the ways college students creatively adapt “across languages and modes,” Sohan is “interested in how composers outside university contexts, and across history, engage in such work—albeit by using more obviously monolingual resources—and how they adapt to and change the system as a result” (15). To take up this challenge, Sohan explores an Oregonian woman in the 1930s who joined the Townsend Movement, a Quaker minister in the mid-1800s attempting to influence the course of the Civil War, and the Gee’s Bend quilters, African American women in Alabama who have been creating quilts for generations as both a functional material good and a form of resistant art and some Townsendites that also used quilting to do rhetorical work.

Chapter 1: The Pen as Sword: The Townsend Letter-Writing Campaigns and the Case of Pearl Burkhalter

The historical analysis of both the Townsendites and Pearl S. Burkhalter, in particular, is the strongest case study in the book. Sohan first outlines the Townsend Movement started by Francis Everett Townsend’s 1933 letter to a California newspaper arguing for a sales tax to fund a pension for citizens over 60 that becomes “the Townsend Plan” and spawns populist “clubs” across the country. She then focuses on one member, Pearl S. Burkhalter. Sohan’s careful discussion of the Townsend Movement as a counter to FDR’s New Deal and social security system, offers an overview of an important movement in the history of American governmental policy and populism that is particularly noteworthy considering current populist movements. Sohan focuses, not on the founder, but on one particularly enthusiastic female member, who eventually becomes a chapter president in Oregon City, Oregon. Sohan scours the archival treasure left by Burkhalter, a prolific writer, to produce a detailed study of her unique rhetorical choices. For her members, Burkhalter models an aggressive letter writing style, though she, herself, did not follow the polite, conservative models provided by the national leadership. This lively and compelling history offers a glimpse at a woman attempting to simultaneously embrace politically conservative and gendered norms and her desire for power beyond those norms.

Chapter 2: With Pen and Prayer: The Life and Ministry of Eliza P. Gurney

Sohan’s discussion of Eliza P. Gurney, a Quaker minister, who engaged with President Lincoln presents a slight twist on previous scholarship on this woman rhetor. Unlike Burkhalter, some scholarship has been written about Gurney’s letters and work (one of her letters was in Lincoln’s pocket when he was shot). This chapter attempts to reject characterizations of Gurney as simply a “‘pious, loveable old Quaker woman’” (71) and demonstrate the subtle ways Gurney both strategically used Quaker rhetorical practices and parted from them to claim the right to speak beyond prescribed parameters. Sohan argues that Gurney was particularly adept at seizing kairotic moments and finding ways to personally relate to prominent figures like Lincoln as a way to gain influence. Following a strong tradition of scholarship on women rhetors who use religion as an avenue to gain public agency, Sohan’s discussion adds another example to this list.

Chapter 3: “The Needle as the Pen”: Recontextualizing the Discourse of Quilts and Quiltmaking”

In the final short case study, Sohan turns from letter writing to the quilt making of the Gee’s Bend quiltmakers, especially Mensie Lee Pettway and Annie Mae Young. Following a look at the difficulties the Gee’s Bend quilters faced once white audiences began viewing and critiquing their work as “high art,” she concludes with quilts made by members of various Townsend clubs in the 1930’s and highlights their very different motives. To make the jump from text to quilt (pen to needle), Sohan employs Elaine Richardson’s argument that quilts are “African American female literacy practice” (118). It is well documented that quilting is an important material rhetoric, especially for women, and a rhetorical form that has simultaneously served as household staple, art, protest, memory and memorial. Quilt making is, unmistakably, a vital node in feminist rhetorical study. While Sohan’s chapter offers a reminder of the value of the rhetoric of quilting, the transition from the introductory theory is less seamless than in the first two chapters.

There is a long and complex history of scholarship on resistance (variously named activism, civil disobedience, social movements, and protest) that can be found in rhetorical studies, communication studies, political and social science (among other fields). Sohan comes at the study of resistance, specifically “everyday resistance” from composition and writing studies (which, of course, is influenced by these other fields) that brings a pedagogical, teacher/student dynamic to this study. While it made the shift to quilting a bit rocky, it did offer an angle on resistance that highlights the everyday acts of folks existing within organized systems, systems that do not always respect or even acknowledge the different experiences and language practices they bring to the table, much in the same ways students must work within institutions of higher learning. This is a choice that also allows Sohan to focus on writing.

Sohan’s conclusion points readers toward more traditional activist scholarship (like Pezzullo and Striphas, Feigenbaum, and Kynard) and provides an attention to the daily, slow, thoughtful work of resistance. As Sarah Ahmed recently encouraged in Living a Feminist Life, feminism is “homework,” a way of living infused in all of our daily acts (7). The readers of Peitho are all familiar with the recovery work that launched feminist rhetorical studies. This work reimagined the narrative of the history of rhetoric to include prominent, public women in the canon. I see Sohan’s work as part of Recovery 2.0. In this next phase, we see/have seen scholarship on rhetoric from “the kitchen, parlor, and nursery; the garden; the church; the body” as Joy Ritchie and Kate Ronald acknowledged in 2001 in Available Means (xvii). As Sohan asserts, not everyone can or wants to be a traditional, public hero. We owe the election of Joe Biden to the women and men, and let’s be honest, mostly Black women, who did the everyday work to cajole, humor, force, argue folks to registration tables, to the polls. The rhetors we choose to study and teach begin to create a canon cementing ideas about who makes change and how. What might it look like to focus on artifacts from a small town PTA that made a significant policy change rather than the Department of Education? What methods can we use to assess the strategies of quiet leaders who don’t make the headlines but spent 30 years shifting policies and ideas about race and gender and class one human at a time: ethnography, film? What does it mean for our careers to study folks who made change, but changes we mourn or disagree with? I look forward to more scholarship on these everyday creative efforts.

From Isolated Stories to a Collective: Speaking Out About Misogyny in English... Tributes to Kate Ronald
Scroll to top