Andrea Abernethy Lunsford, who has taught every level from 7th grade through Ph.D., is the Louise Hewlett Nixon Professor of English, Emerita, at Stanford University. The Director of Stanford’s Program in Writing and Rhetoric from 2000 to 2013, she is also editor, author or co-author of twenty three books, including Essays on Classical Rhetoric and Modern Discourse; Singular Texts/Plural Authors; Reclaiming Rhetorica; Everything’s an Argument; Everyone’s an Author, and Let’s Talk.. Awards include the MLA’s Mina Shaughnessy Prize, the Conference on College Composition and Communication award for best article, and the CCC Exemplar Award. She is currently co-editing The Norton Anthology of Rhetoric and Writing 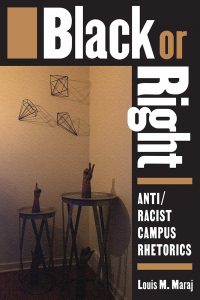 “The fact of the matter is, we wouldn’t have any feminism worth thinking about or writing about without the work of feminists of color.” So opens the call for papers for this issue of Peitho, which goes on to elaborate on the claim and to insist that “we need to center the voices of feminist of color . . . to ensure our feminist futures.” In Black or Right, Lou Maraj answers this call, using the Black feminist philosophy of literacy as the practice of freedom and focusing throughout on how Black relational feminist methodologies and ecologies work to establish Black rhetorical agency as one means of disrupting (“mashin’ up de place” xiii) in order to counter white (institutional and individual) defensiveness—and a whole lot more.

Maraj’s book mixes and bends genres, languages, disciplines, and methods to participate in what Christina Sharpe calls “wake work”—undisciplined, disruptive, fracturing, paradoxical resistances that rupture the “immanence and imminence” of Black death both aesthetically and materially “to move toward Black rhetorical agency” (8). Black or Right embodies Maraj’s personal journey to such agency, opening with the “story of arrival” from his home in Trinidad to the “American dream” at a small northeastern liberal arts college, where he learns that a joint newspaper assignment seems to require a white male to accompany his white female partner and him (“It’s strange. Is this what Americans call a ‘date’?”) to cover the story–and that his freshman English teacher would not recognize, much less value “the lavish prose I was brought up on in the British Caribbean education system. . . Americans want a thesis” (4) Maraj quickly moves to provide a thesis as well as the other accoutrements of white academic discourse—but as this book so richly demonstrates, he learned not just to resist but to unlearn such structures as he “grapples with notions of Blackness in white institutional spaces to theorize how Black identity operates with/against neoliberal ideas of difference” (9) and leads the way to proactive antiracist practices.

The first chapter, “’Are you Black, though?’” explores one such practice, an autoethnographical approach, defined as “an application of African indigenous methodological ‘self-knowledge’” to explore the dynamics at work in one of his classrooms. Recently graduated from his primarily white undergraduate institution, Maraj is now a graduate student instructor teaching a second-year writing class at primarily white Midwestern State University, a class with only three Black-identified students, including “T,” who persistently challenges Maraj, asking him on more than a few occasions “Are you Black?” Maraj uses such encounters to frame a careful analysis of Blackness, informed by Black feminist and indigenous African understandings of relationality and to put forward the concept of Black autoethnography as a rhetoric “to theorize Black, potentially antiracist, agency within rhetoric, writing, and literacy studies” (25). You’re going to want to read Maraj’s full account, as T makes it clear that in his view Maraj’s position “at the front of the classroom” at this mostly white institution calls his Blackness into question–and as he and T negotiate layers and definitions of Blackness and of Black agency; like so much of the rest of the book, this chapter is a page-turner. The Black autoethnographical approach featured in this chapter includes a helpful review of this tradition in rhetoric and literacy studies—in the work of Geneva Smitherman, Keith Gilyard, Jacqueline Jones Royster, Carmen Kynard, Vershawn Young, and June Jordan. These and other “griots-as-scholars” use autoethnography, performativity, and relationality as they theorize, often in narrative ways that contrast with the “standard fare” of academic research.

Chapter 2, “Composing Black Matter/s,” offers hashtagging as another potentially Black-centering and anti-racist practice. In Maraj’s analysis, hashtags “make and remake,” they “permeate” they “code and decode,” representing a “marginalized out of school literacy” (44, 54). Drawing on deep analysis of Black Twitter as well as on scholarship surrounding activities on this site, Maraj argues that hashtags offer a space for Black students to practice resistance at primarily white institutions while at the same time reshaping what we think of as writing and reading—and even thinking. Situating this discussion in the long historical context of commonplace collections/commonplace books, Maraj shows how hashtagging can both challenge and remediate these tools for shaping understandings of the world. My grandmother, whose father fought on the side of the Union in the Civil War, kept a commonplace book that she gave recitations from on “elocution days” in her elementary school. My mother kept a commonplace book all her life, pasting in inspirational passages she wanted to “know by heart” and collecting wisdom she wanted to pass on to her children. Understanding hashtagging as a continuation of this tradition but also and more importantly as a challenge to and reshaping of it—that is, understanding hashtagging as “a creative, analytic composition process with potentials to build, curate, archive, protest, and continue histories that interact with, and themselves constitute, social acts”—well, that’s a brilliant move that I believe will inspire teachers and student writers across the country. Building on Jay Bolter’s concept of “remediation,” Maraj shows how remediated commonplace books/hashtagging can help Black students resist dominant ideologies through communal practices to shape what counts as knowledge even as they guard against co-optation by white institutional ideology. “We’ve heard the fake news,” Maraj says. “Let’s unmake it,” Finally, this chapter also includes a thorough description of Maraj’s “Tumblr as Commonplace Book” assignment, brilliantly illustrated, as well as a provocative discussion of #blacklivematter and #BlackLivesStillMatter, highlighting the dialogic potential of hashtagging, which draws on the historical importance of African-based oral, dialogic traditions.)

#blacklivesmatter plays an important role in Chapter 3, “’All My Life I Had to Fight’” as Maraj reshapes and reimagines literacy events as digital and embodied as well as print or textual and then explores the #blacklivesmatter movement through the lens of what he terms inter(con)textual reading, a practice that looks at the dense web of associations among three particular literacy events: Alicia Garza’s 2014 “A Herstory of the #BlackLivesMatter Movement,” rapper Lamar’s 2016 performance of “Alright,” and a Black Lives Matter Syllabus created by NYU’s Frank Leon Roberts in 2016. This inter(con)textual reading of these literacy events

helps us to not only see connections but also gaps, offering possibilities for meaning to create, fill, and exceed them, or compelling us to seek other texts, subjects, or rhetorical bodies as related foci for analysis. In these ways, Black inter(con)textualality reads/writes Blackness dynamically. (99-100)

This inter(con)textual reading is, as Maraj rightly notes, deeply rhetorical, but its framing within Black feminist relational thinking shows, in his words, “the outside-inside-ness of Blackness in white worlds” and its potential for destabilizing those spaces.

Black Inter(con)textual reading provides a method for carrying out the rhetorical reclamations featured in chapter 4 of Maraj’s book. Defined as “acts of turning stigmatizing racialized attention mapped onto Black identities back onto the gaze of historically white institutions to publicly question/critique their power in moment of fracture,” such reclamations illuminate Black agency at work in white spaces to counter white defensiveness. This multilayered chapter showcases Black disruption through an analysis of three particular literacy events: Black Lives Matter in Classrooms events; a series of public safety alerts; and a YouTube Video (“Administration Threatens Expulsion”), all occurring in the spring of 2016 at Midwestern State University, the not-so-anonymous campus where Maraj was teaching at the time. The detailed description of these events makes for a deeply depressing and distressing—though not surprising—demonstration of just what Maraj means by “white defensiveness,” in this case white institutional defensiveness that every reader of Peitho will recognize. In every instance, Black students speak the truth of racism, clapping back and speaking back to create a rupture or fracture that then allows for rhetorical reclamation of the meanings and instrumentalities of Blackness: “the student protester rallies race conceptually in critiquing the very idea of racialization, in antiracism” in one memorable instance. Especially chilling is Maraj’s discussion of the “public safety” announcements, all of which are deeply racist, and which are resisted and at least partially reclaimed through Black rhetorical agency that rearticulates the “situations we are put with/in in Black non/Being,” where “we were never meant to survive” (131-32).

Maraj’s conclusion, a meditation on “De Ting about Blackness,” takes him back home for the first time since beginning his tenure track position at Pittsburgh—home with its familiar furniture and photos and memories, and with his Mother—where he receives a message from a departmental administrator who wants to make sure that his upcoming undergrad course, “Projects in Black Rhetoric,” is “global” or “transnational” enough to market to other departments. “How Black are you in these fractures?” Maraj wonders: “De ting about Blackness is that thing that also surrounds it, co-constitutes it with its ghosts.” (134) Maraj’s meditation on the word “ting” in Trinibagonian usage shows it to be a verb, noun, pronoun, or “what have you,” and maps its amorphous and elastic qualities that allow for Being and for Doing. This sense of being and doing inside/out, with/in, in/between, both/and are signs of Black disruption and of its “generativity, its polysemy, a multiplicity of possibilities for Blackness to mean and how Blackness could mean” (144). Throughout this meditation, as throughout the entire book, the foundation of Black feminist thinking and practice holds strong, supporting and enabling Maraj as he tries to “undiscipline,” to “mind fractures to find the kind of rest that keeps me waking up as de ting about Blackness always outside of me, asking, other/wise/.” (147). Maraj ends this book with words from Fanon, urging a “true leap” to introduce “invention into existence.”

It seems to me that this is precisely what Maraj has done in Black or Right—introduce invention into existence in a whole panoply of ways. Adding to the work of Royster, Logan, Smitherman, Kynard, Gilyard, Banks, Young, and other griot/scholars, Maraj’s book brings us closer to perceiving and understanding the contours of a complete and robust African American rhetoric, one that is thoroughly theorized as well as practiced

This realization is nothing short of thrilling: I have learned so much from reading and engaging this text, in trying to read it rhetorically, inter(con)textually when possible, to not just hear what Maraj is saying but to listen to his voice and the voices of all the Black feminists who echo through these pages—and to listen to all their messages with purposeful, striving intention. For an old(er!) white woman, it has not been easy to listen in this way. But oh has it been worth the effort.

DIY Invitational Rhetoric: Engaging with the Past, Promoting Ongoing Dialogues,... On Testimony, Bridges, and Rhetoric
Scroll to top