In lieu of the Coalition’s annual “Wednesday Evening Event” at CCCC, we hope you will join us for a conversation with feminist scholar, teacher, and filmmaker, Alexandra Hidalgo (details below). Don’t worry–we haven’t forgotten about the second half of our annual event! Information about virtual “mentoring tables” is coming soon.

“Art in the Time of Chaos: Intersectional Feminist

Collaborations Between Latinas Across Continents”

Registration is free but required. Register at: https://us02web.zoom.us/webinar/register/WN_JlZedxV1SFSGaUske5QVLA 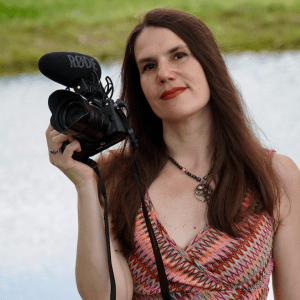 As cofounder of the online publication agnès films: supporting women and feminist filmmakers and author of Cámara Retórica, Alexandra Hidalgo has spent over a decade theorizing feminist filmmaking as a methodology and activist tool.

In this presentation, Hidalgo will use film scenes and crew interviews in order to discuss her in-production feature documentary A Family of Stories, which tells the story of how her life was transformed by her journey to investigate the mystery of her father’s 1983 vanishing while he was buying gold in the Venezuelan Amazon and the secrets she uncovered about him, her family, and herself.

To capture her journey of self and familial discovery, Hidalgo works with producer Natalia Machado, editor Cristina Carrasco, and consulting editor Andrea Chignoli—fellow Latinas living in Argentina, Spain, and Chile. Her collaborators have brought their own experiences into shaping the film, enriching the story with their perspective. In the presentation, Hidalgo will screen scenes from the film and describe their collaboration process to argue for the value of intersectional feminism when working on memoir projects.

Alexandra Hidalgo is an award-winning Venezuelan filmmaker, film and TV critic, theorist, memoirist, and editor whose documentaries have been official selections for film festivals in 15 countries and been screened at universities around the United States. Her videos and writing have been featured on The Hollywood Reporter, IndieWire, NPR, The Criterion Collection, and Women and Hollywood.