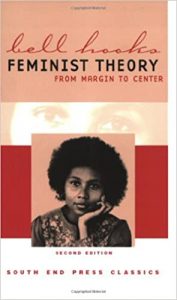 The Coalition mourns the passing of bell hooks on December 15, 2021. In recognition of her immeasurable legacy, the editorial team at Peitho, the journal of  the Coalition, invites short memorial pieces for the winter 2022 issue. Contributions might reflect on how hooks influenced feminist teaching, research, activism, and more.
/wp-content/uploads/2020/03/CFSHRC-header-with-tagline.png 0 0 CFSHRC President /wp-content/uploads/2020/03/CFSHRC-header-with-tagline.png CFSHRC President2022-01-21 19:42:392022-01-21 19:42:39Peitho Seeking Short Memorial Pieces on bell hooks (deadline 2-28)

The fact of the matter is, we wouldn’t have any feminism worth thinking about or writing about without the work of feminists of color. They have pushed feminism to be better and do better since the beginning. However, these feminists often are not afforded the credit they deserve for creating feminist spaces and demanding change within them. During the Suffrage Movement it was Sojourner Truth’s speech, “Ain’t I a Woman,” at the Women’s Rights Convention, Akron, Ohio, in 1851 that demanded we recognize the voices and perspectives of all women. The work that Black women, lesbians and working class women did to push the mainstream white middle class feminism of the 1970s to speak across race, class, and sexuality made feminism stronger. Feminists of color in the 1970s writing in anthologies like This Bridge Called My Back, Home Girls, and But Some of Us Are Brave started building a third wave of feminism before the 1990s gave us the Third Wave. And it was a young Black woman named Rebecca Walker who first proclaimed “we are the third wave.” In short, it has always been the voices of feminists of color that pushed feminist movements to realize the radical notion that all womxn are people. In this issue, we are looking for scholarly complications to the discourse around white feminism that historically approach the idea: Feminism has never really been white.

This contemporary moment, perhaps more than any other has shown us the relevance and importance of race, feminism and rhetoric. The current global pandemic has put a spotlight on institutionalized inequities around race, class and gender. The on-going protests and unrest around police brutality and murders have forced us to come to terms with the meaning of solidarity and coalition in the struggle. Extreme nationalism has ripped children from the arms of their parents and placed them in cages going against every fiber of the founding lies of the United States. The recent election and the fact that yet again over 50% of the white women who voted cast their vote for Donald Trump has made clear that assumed alliances around gender are not to be taken for granted when we add race to the mix. Now more than ever we need to be in nuanced and critical conversations on race, feminism, and rhetoric.

From Fair Fight Now to the Black Lives Matter Movement, Black women have been the driving force behind the change we need in America today. In the wake of the 2020 US elections, we need to have more conversations about how feminists of color combat the normalization of the refusal to transfer power, concede losses, and acknowledge the truth. Like we saw with the Women’s March controversy, we can not continue to tolerate feminists of color being pushed to the margins in the spaces we created. This bridge can no longer be our backs. As “The Squad” on Capitol Hill grows to include even more women of color voices, we need to make space for complex conversations around what diversity and equality really means while continuing to hold our leadership accountable to the progress we have made. Now is not the time for half-measures, talking points for views, and conservative approaches. We need to center the voices of feminists of color who are doing the work to ensure our feminist futures. We hope that the essays in this special issue will help shed light on all the important and nuanced ways that race, feminism and rhetoric intersect across time, in this moment, and around the world.

The editors invite articles, manifestos, and alternative works that consider, but are not limited to, the following questions and topics:

Please send completed articles, manifestos, and book reviews. We are also open to accepting alternative formats such as digital, audio, and visual compositions. All submissions should be emailed to both editors, Gwendolyn D. Pough <gdpough@syr.edu> and Stephanie Jones <svjones@syr.edu>, by January 30, 2021. Peer review will occur during the winter of 2021, Revisions will be due in the spring of 2021, and the anticipated publication date will be summer of 2021.

On May 15th, 2016, the Coalition of Women Scholars in the History of Rhetoric & Composition became the Coalition of Feminist Scholars in the History of Rhetoric & Composition (“Welcome to the Coalition of FEMINIST Scholars…”). This shift from “women” to “feminist” signals two significant changes. First, it centralizes feminist praxis as it reaffirms, through the name and mission statement, the Coalition’s commitment to “intersectional” feminist inquiry (Crenshaw, 1989). Such a commitment had already begun strengthening since CFSHRC transformed Peitho into a journal in 2012. Peitho’s contributors have helped readers consider how women’s experiences of gender-­based oppression are always-­already bound up in questions of race (August, 2014; Royster, 2012; Licona & Chávez, 2015; Martinez, 2018), region (Khoury, 2015; Miron, 2018; Nish, 2018; Thompson, 2017), class (Dubisar, 2016; Guglielmo, 2013; Hallenbeck & Smith, 2015), orientation (Bentley & Lee, 2018; Malinowitz, 2013; Osrorio, 2015), disability (Gay, 2017; Phillips & Leahy, 2017), and embodiment (Johnson, Levy, Manthey & Novotny, 2015).

The second impact of the Coalition’s name change concerns inclusivity—membership is now openly welcoming for all people as the scope of the organization has broadened. This reframing emphasizes that feminist concerns in Rhetoric & Composition are everyone’s concerns, which follows an implicit understanding that women are not the only people who experience gender­-based oppression. Indeed, for the last twenty years Transgender Studies has worked alongside feminist, queer, disability, and critical race studies to offer a more expansive view of gender-­based oppression and empowerment.

Putting this emerging tradition of trans-­specific inquiry in Rhetorical Studies into conversation with the Coalition’s gender­-expansive focus on feminist inquiry, we invite contributions to a special issue of Peitho focused on Transgender Rhetorics. We can imagine many topics contributors might pursue, such as:

This issue will also include a special section titled “Recovering Transgender Rhetoric,” which will consist of short essays (1,000–2,000 words) or brief digital pieces that closely consider items available in the Digital Transgender Archive (www.digitaltransgenderarchive.net). This section of the special issue invites scholars to (re)turn to the archive to excavate primary source materials that offer a point of entry for recovering Transgender Rhetoric. Contributions to this section might focus on one or more items in the Digital Transgender Archive that help us to begin thinking through transgender rhetorical practices. This format is designed to be welcoming for a wide range of scholars who might not otherwise explore the topic of Transgender Rhetoric or those who may not have a full­-length manuscript to contribute.

All submissions should be emailed to both editors—GPat Patterson (gpatters@kent.edu) and K.J. Rawson (kjrawson@holycross.edu)—by September 30th, 2019. Peer review will occur during the fall of 2019, revisions will be due in spring 2020, and the anticipated publication date will be summer 2020. If you are considering a digital or multimodal format, please reach out to the editors in advance of your submission to confirm that the format could be supported.

Feel free to contact the editors at any point to pitch an idea or pose any questions you might have!